Wittgenstein and the Philosophy of Information. Proceedings of the 30th International Ludwig Wittgenstein-Symposium in Kirchberg, 2007 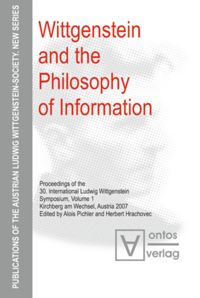 This is the first of two volumes of the proceedings from the 30th International Wittgenstein Symposium in Kirchberg, August 2007. In addition to several new contributions to Wittgenstein research (by N. Garver, M. Kross, St. Majetschak, K. Neumer, V. Rodych, L. M. Valdés-Villanueva), this volume contains articles with a special focus on digital Wittgenstein research and Wittgenstein's role for the understanding of the digital turn (by L. Bazzocchi, A. Biletzki, J. de Mul, P. Keicher, D. Köhler, K. Mayr, D. G. Stern), as well as discussions - not necessarily from a Wittgensteinian perspective - about issues in the philosophy of information, including computational ontologies (by D. Apollon, G. Chaitin, F. Dretske, L. Floridi, Y. Okamoto, M. Pasin and E. Motta).