A Typological Perspective on Latvian Grammar 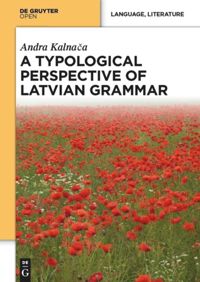 Theoretical studies of Latvian grammar have a great deal to offer to contemporary linguistics. Although traditionally Lithuanian has been the most widely studied Baltic language in diachronic and synchronic linguistics alike, Latvian has a number of distinctive features that can prove valuable both for historical, and perhaps even more so, for synchronic language research. Therefore, at the very least, contemporary typological, areal, and language contact studies involving Baltic languages should account for data from Latvian. Typologically, Latvian grammar is a classic Indo-European (Baltic) system with well-developed inflection and derivation. However, it also bears certain similarities to the Finno-Ugric languages, which can be reasonably explained by its areal and historical background. This applies, for example, to the mood system and its connections with modality and evidentiality in Latvian, also to the correlation between aspect and quantity as manifested in verbal and nominal (case) forms. The relations between debitive mood, certain constructions with reflexive verbs, and voice in Latvian are intriguing examples of unusual morphosyntactic features. Accordingly, the book focuses on the following topics: case system and declension (with emphasis on the polyfunctionality of case forms), gender, conjugation, tense and personal forms, aspect, mood, modality and evidentiality, reflexive verbs, and voice. The examples included in this book have been taken from the Balanced Corpus of Modern Latvian (Lidzsvarots musdienu latviešu valodas tekstu korpuss, available at www.korpuss.lv), www.google.lv, mass media, and fiction texts (see the List of language sources) without regard to relative frequency ratios.