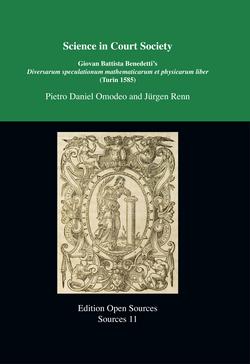 Giovanni Battista Benedetti is counted as one of the most brilliant mathematical and philosophical minds of the late Italian Renaissance. However, the theoretical and historical relevance of his work is still obscure in many respects. This is due to several factors, principal among which is the relative rarity of his major work, Diversarum speculationum mathematicarum et physicarum liber (Book including various mathematical and physical speculations), 1585. This work was a major contribution to Renaissance science, especially due to its insights on mechanics, the mathematical approach to natural investigation, and the connection of celestial and terrestrial dynamics in a post-Copernican perspective. The first edition was an elegant folio, which includes heterogeneous writings not only on mathematics and physics but also on technical and philosophical issues. Benedetti presented these as short treatises or letters addressed to gentlemen, courtiers, scholars, engineers, and practitioners of different arts. The Diversae speculationes appeared in a series of prestigious volumes aimed at celebrating the magnificence of the court and the capital. It aimed to make the quality of the court mathematician’s research and skills publicly appreciable. It also bore witness to the intensity of the cultural debates going on in Turin or connecting it with other centers, especially Venice. This open access edition makes the Benedetti’s work accessible to a large scholarly readership. In the extensive introduction, his achievement is presented in its rich complexity. Benedetti is emblematic of his time and of the non-linearity of the historical process of Renaissance science with its multicentric institutions and scientific networks. The apparent fragmentary nature of his work hides a fundamental unity of the conception and the method, both of which rest on geometry. Benedetti regarded mechanics as a model, but he enlarged his perspective to include the most varied fields of investigation and concretely to demonstrate the fruitfulness of his approach to universal knowledge, astronomy, physics, meteorology, and even to ethics. Edition Open Sources (EOS) pioneers a new paradigm in the publishing of historical sources. Academic editions of primary sources in the history of science are published in online, digital, and print formats that present facsimiles, transcriptions, and often translations of original works with an introduction to the author, the text, and the context in which it was written. The sources are historical books, manuscripts, documents, or other archival materials that are otherwise difficult to access. EOS is a cooperation between the University of Oklahoma Libraries, the Department for the History of Science der University of Oklahoma, and the Max Planck Institute for the History of Science.