On Ancient Grammars of Space. Linguistic Research on the Expression of Spatial Relations and Motion in Ancient Languages 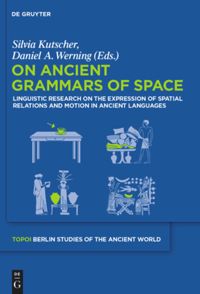 This volume presents new research by the Topoi group "The Conception of Spaces in Language" on the expression of spatial relations in ancient languages. The six articles in this volume discuss static and dynamic aspects of the spatial grammars of Ancient to Medieval Greek, Akkadian, Hittite, and Hieroglyphic Ancient Egyptian, as well as field data on eight modern languages (Arabic, Hebrew, English, German, Russian, French, Italian, and Spanish). Among the grams discussed are spatial particles, motion verbs, case and, most prominently, spatial prepositions. All ancient language data are fully explained in linguistic word-by-word glosses and are therefore accessible to scholars who are not themselves experts on the respective languages. Taken together, these contributions extend the scope of research on spatial grammar back to the third millennium BCE.