Institutional Change in the Public Sphere. Views on the Nordic Model 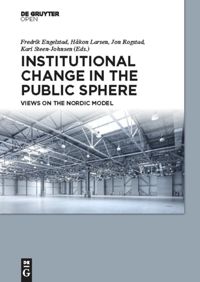 The main focus of the book is institutional change in the Scandinavian model, with special emphasis on Norway. There are many reasons to pay closer attention to the Norwegian case when it comes to analyses of changes in the public sphere. In the country’s political history, the arts and the media played a particular role in the processes towards sovereignty at the beginning of the 20th century. On a par with the other Scandinavian countries, Norway is in the forefront in the world in the distribution and uses of Internet technology. As an extreme case, the most corporatist society within the family of the “Nordic Model”, it offers an opportunity both for intriguing case studies and for challenging and refining existing theory on processes of institutional change in media policy and cultural policy. It supplements two recent, important books on political economy in Scandinavia: Varieties of Liberalization and the New Politics of Social Solidarity (Kathleen Thelen, 2014), and The Political Construction of Business Interests (Cathie Jo Martin and Duane Swank, 2013). There are further reasons to pay particular attention to the Scandinavian, and more specifically the Norwegian cases: (i) They are to varying degrees neo-corporatist societies, characterized by ongoing bargaining over social and political reform processes. From a theoretical perspective this invites reflections which, to some extent, are at odds with the dominant conceptions of institutional change. Neither models of path dependency nor models of aggregate, incremental change focus on the continuous social bargaining over institutional change. (ii) Despite recent processes of liberalization, common to the Western world as a whole, corporatism implies a close connection between state, public sphere, cultural life, and religion. This also means that institutions are closely bundled, in an even stronger way than assumed for example in the Varieties of Capitalism literature. Furthermore, we only have scarce insight in the way the different spheres of corporatism are connected and interact. In the proposed edited volume we have collected historical-institutional case studies from a broad set of social fields (a detailed outline of contents and contributors is attached): • Critical assessments of Jürgen Habermas’ theory of the public sphere • Can the public sphere be considered an institution? • The central position of the public sphere in social and political change in Norway • Digital transformations and effects of the growing PR industry on the public sphere • Institutionalization of social media in local politics and voluntary organizations • Legitimation work in the public sphere • freedom of expression and warning in the workplace • “Return of religion” to the public sphere, and its effects