Inside War. Understanding the Evolution of Organised Violence in the Global Era 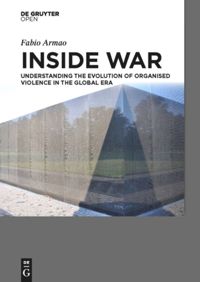 The post-Cold War era was characterised by both the recurrence of state wars and the spread of forms of organised violence other than wars. Asymmetric warfare between alliances led by the USA and groups of insurgents, such as those witnessed in Afghanistan and Iraq, coexist alongside domestic conflicts, such as that of former Yugoslavia and, more recently, Libya and Syria; and still other conflicts involving gangs, mafias or narco-traffickers. The massive military-industrial complexes conceived in the context of the threat of nuclear Armageddon are still there of course, but they now coexist with irregular armies of insurgents carrying out massacres through the use of light weapons and improvised explosives devices. This book oppose the idea that this situation prefigures the return to an anarchical, pre-political condition, by assuming that new wars are rather the product of the blurring of the public-private divide, induced by the end of the Cold War, together with globalisation. As a consequence, also the internal and external factors are blurred; and ever more permeable and elusive is becoming even the border between war and crime. Inside War goes beyond a state-centered analysis and adopts an interdisciplinary and multilayered approach, and is intended to foster the dialogue among researchers from different fields. It places war at the core of analysis, assuming that the reality of war is what we make of it; and that the only insurmountable limit to our comprehension of war is our way of knowing and representing it. Fabio Armao teaches courses in Politics and Globalisation Processes, and Criminal Systems. He has been Visiting Professor at Cornell University, and co-convenor of the Standing Group on Organized Crime, European Consortium for Political Research. Founding member of T.wai (Torino World Affair Institute), he is also member of the Editorial Board of ‘Global Crime’. His research interests and publications focus on international wars and geopolitics, on violent non-state actors and transnational organised crime, and on urban security.