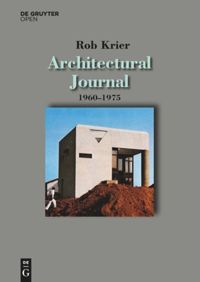 How does one become a recognized architect? Where does the inspiration come from and how is it transformed into buildings, streets and cities? With his Architectural Journal Rob Krier takes the readers on a fascinating journey, guiding one through pivotal moments of early stages of his career as an architect. With a sense of humour, empathy and charm Krier tells a story of his professional path, starting with holidays spent with his grandparents, images, colors and smells that shaped his future choices. He talks about his triumphs and stumbles, giving an intimate insight into the architectural profession, deprived of any pretence to eternal greatness and heroic narrative. The journal encompasses 15 formative years of Krier’s career, starting from architectural studies in Munich, through trips and temporary settlements in Luxemburg, Stuttgart and Lausanne. Krier’s memories are accompanied by theoretical texts. Here he touches upon architect’s responsibilities, importance of historical legacy and exhorts to boycott ugliness in the name of beauty. Striving for something else than pure functionality in architecture, Krier calls for poetical approach, so characteristic for his work, stating: Poetry is in the breath of the building, the aroma that exudes from all its nooks”. Rob Krier is one of the most influential architects and urban planners of the second half of the 20th century. His theoretical writings deal with the idea of town planning informed by traditional notions of harmony, civic space and community.