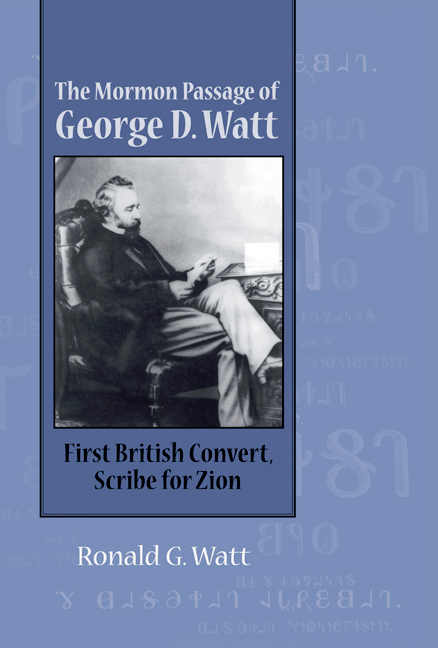 Nineteenth-century Mormonism was a frontier religion with roots so entangled with the American experience as to be seen by some scholars as the most American of religions and by others as a direct critique of that experience. Yet it also was a missionary religion that through proselytizing quickly gained an international, if initially mostly Northern European, makeup. This mix brought it a roster of interesting characters: frontiersmen and hardscrabble farmers; preachers and theologians; dreamers and idealists; craftsmen and social engineers. Althoughthe Mormon elite soon took on, as elites do, a rather fixed, dynastic character, the social origins of its first-generation members were quite diverse. The Mormon Church at its beginning provided a good study in upward mobility. George D. Watt, for instance, was a self-educated convert with both unusual, for the time and place of frontier Utah, clerical skills and ambitions to improve his status. A man with intellectual pretensions, he had little formal training but a strong will, avid curiosity, and appetite for knowledge. Those traits made up for what he lacked in schooling and drew him into what served as intellectual circles among the Mormon elite and, later, on the church’s disenchanted fringe. They also made him for a time essential to Brigham Young as a clerk and reporter but sent him into religious and social exile, due to a contest of wills with his employer that Watt had no chance of winning,. Reputed to have been the first of the many English converts to the LDS church, Watt’s repeatedly demonstrated ability to learn quickly made him an early master of Pitman shorthand, just then coming into use. Employing this skill, he made two important contributions to Mormon literature: First, he more than anyone created, based on that shorthand, the Deseret Alphabet, which now is a curiosity but then was an innovation that, intended to create a unique Mormon orthography and pedagogy, stands well for the broad attempt to build in Utah the wholly self-sufficient culture of the Kingdom of God. Second, his efficient note taking allowed him to take down the sermons of Young and other church leaders and publish them in the Journal of Discourses, an indispensible historical record. In addition Watt learned, thought, and wrote about a variety of subjects, from horticulture to spiritualism, which helped define him as a resident Utah intellectual. He eventually left the Mormon Church, but the records of his domestic life before and after that decision provide a rich portrait of the working of polygamous households, particularly complicated ones in his case. Despite his accomplishments, because of his potential, George Watt’s story is at heart a tragedy. His breach with Young resulted in social isolation, poverty, and rejection by friends and associates. He never, though, lost his sense of independence or his avid mind. Whether facing an economic affront or pressing, in writing, his own conclusions about life and God, he engaged the challenge where he found it.