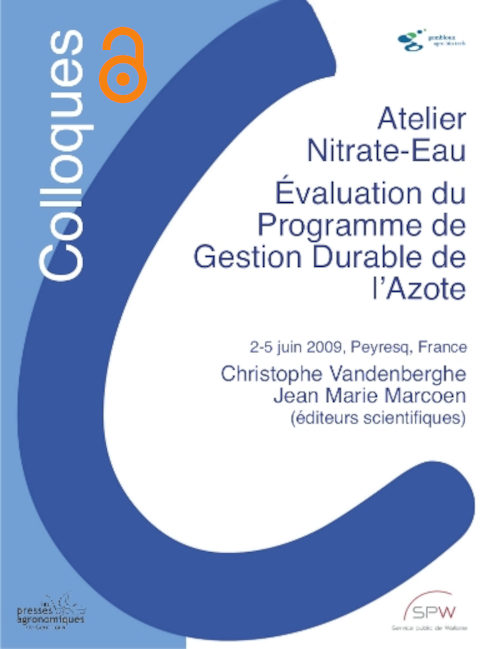 In 1991, Europe adopted the Nitrates Directive concerning the protection of waters against pollution by nitrates of agricultural origin. This directive requires Member States to designate vulnerable zones (zones in which the nitrate concentration in water exceeds or is likely to reach the limit of 50 mg NO3-.l-1), to implement action programs that can be revised every four years and to draw up, at the same frequency, an evaluation report on these programs for the European Commission. In 1994, the Walloon Region of Belgium delimited the first vulnerable areas (Bruxellian Sands and Hesbaye Cretaceous). In 1996, it defined a code of good agricultural practices that was revised in the form of an Action Program in 2002 and 2007. Two leaflets presenting the Action Program in its 2007 version are attached to this book and available on the website www.nitrawal.be. At each of these stages (1996, 2002 and 2007), the scientists involved made proposals based on their research work. In 2000, the Walloon Government set up the "Nitrawal Management Structure", composed of five members: the Walloon Federation of Agriculture, Aquawal (Professional Union of Water Cycle Operators in the Walloon Region), the Nitrawal non-profit organization, the Catholic University of Louvain (Department of Applied Biology and Agricultural Production) and the University Faculty of Agronomic Sciences of Gembloux (Geopedology Laboratory, GRENeRA(1)). Among their missions, these two university teams are responsible for evaluating the Action Programs and proposing any necessary revisions. The next revision of the Action Program, named in the Walloon region "Sustainable Nitrogen Management Program in Agriculture (PGDA)" will take place in 2010-2011 to respect the four-year periodicity imposed by the Nitrates Directive. GRENeRA(1), in the framework of its missions, organized from June 2 to 5, 2009 a workshop gathering scientists from the Catholic University of Louvain, the Walloon Center for Agronomic Research, the Agricultural Services of the Province of Liège, the University of Liège and the University Faculty of Agronomic Sciences of Gembloux (now ULg - Gembloux Agro-Bio Tech) in order to draw up a state of the art and to present justified proposals for the revision of the current PGDA. The workshop was devoted successively to the study of the following four themes - water (evolution of water quality, agronomic experiments at the plot or watershed level with water impact measurements) - grassland (grazing management, fertilization) and livestock (nitrogen production by animal category), - crops (including crop succession and intercropping) and fertilizers (organic and mineral nitrogen management), - proposals for revision of the ADMP.