Warlike and Peaceful Societies: The Interaction of Genes and Culture 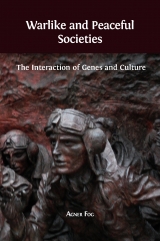 Are humans violent or peaceful by nature? We are both. In this ambitious and wide-ranging book, Agner Fog presents a ground-breaking new argument that explains the existence of differently organised societies using evolutionary theory. It combines natural sciences and social sciences in a way that is rarely seen. According to a concept called regality theory, people show a preference for authoritarianism and strong leadership in times of war or collective danger, but desire egalitarian political systems in times of peace and safety. These individual impulses shape the way societies develop and organise themselves, and in this book Agner argues that there is an evolutionary mechanism behind this flexible psychology. Incorporating a wide range of ideas including evolutionary theory, game theory, and ecological theory, Agner analyses the conditions that make us either strident or docile. He tests this theory on data from contemporary and ancient societies, and provides a detailed explanation of the applications of regality theory to issues of war and peace, the rise and fall of empires, the mass media, economic instability, ecological crisis, and much more. Warlike and Peaceful Societies: The Interaction of Genes and Culture draws on many different fields of both the social sciences and the natural sciences. It will be of interest to academics and students in these fields, including anthropology, political science, history, conflict and peace research, social psychology, and more, as well as the natural sciences, including human biology, human evolution, and ecology.