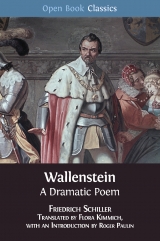 By the time Frederich Schiller came to write the Wallenstein trilogy, his reputation as one of Germany’s leading playwrights was all but secured. Consisting of Wallenstein’s Camp, The Piccolomini and Wallenstein’s Death, this suite of plays appeared between 1798 and 1799, each production under the original direction of Schiller’s collaborator and mentor, Johann Wolfgang von Goethe. Across the three plays, which are now commonly performed and printed together, Schiller charts the thwarted rebellion of General Albrecht von Wallenstein. Based loosely on the events of the Thirty Years’ War, the trilogy provides a unique perspective on an army’s loyalty to their commander and the machinations and intrigues of international diplomacy, giving insight into the military hero who is placed on the threshold between these forces as they are increasingly pitted against one another. The Wallenstein trilogy, formally innovative and modern beyond its time, is a brilliant study of power, ambition and betrayal. In this new translation—the latest in a long line of distinguished English translations starting with Coleridge’s in Schiller’s lifetime—Flora Kimmich succeeds in rendering what is often a difficult source text into language that is at once accessible and enjoyable. Coupled with a complete and careful commentary and a glossary, both of which are targeted to undergraduates, it is accompanied by an authoritative introductory essay by Roger Paulin. Kimmich’s translation will be an invaluable resource for students of German, European literature and history, and military history, as well as to all readers approaching this important set of plays for the first time.