TouchDevelop: Programming on the Go 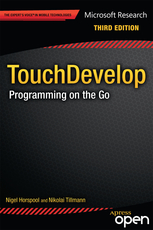 Mobile devices such as smartphones and tablets are set to become the main computers that virtually all people will own and carry with them at all times. And yet,mobile devices are not yet used for all computing tasks. A project at Microsoft Research was created to answer a simple question: “It is possible to create interesting apps directly on a smartphone or tablet, without using a separate PC or a keyboard?” The result is TouchDevelop, a programming environment that runs on all modern mobile devices such as Windows Phone, iPhone, iPad, Android phones and tablets, and also on PCs and Macs. This book walks you through all of the screens of the TouchDevelop app, and it points out similarities and differences of the TouchDevelop language compared to other programming languages. For users, the book can serve as a handyreference next to the phone. The book systematically addresses all programming language constructs, starting from the very basic constructs such as variables and loops. The book also explores many of the phone sensors and data sources which make creating apps for mobile devices so rewarding. If you are new to programming with TouchDevelop, or if you have not yet worked on touchscreen devices, we suggest that you read the book starting from Chapter 1. If you are already familiar with the basic paradigm of the TouchDevelop programming environment, then feel free to jump ahead to the later chapters that address particular topic areas. This book is written from the perspective of a person developing their code using a web browser. The TouchDevelop Web App runs in many modern browsers on many different devices including smartphones and tablets, Macs, PC. All screenshots and navigation instructions refer to the TouchDevelop Web App running in a browser. For Windows Phone, there is a dedicated TouchDevelop app in the Windows Phone Store which gives access to many more sensors and data sources. Starting with the TouchDevelop app v3.0 for Windows Phone 8, the phone app will share the same look and navigation structure and all features of the Web App.