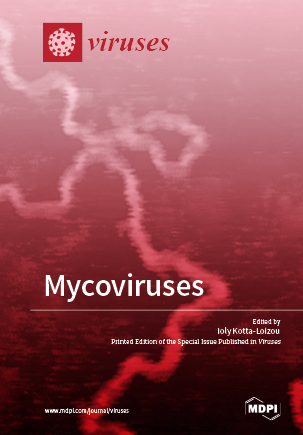 A virus (from the Latin word ‘v?rus’ meaning ‘venom’ or ‘poison’) is a microorganism invisible to the naked eye. Viruses can multiply exclusively by entering a cell and using the cell’s resources to create copies of themselves. As the origin of their name suggests, viruses are generally considered dangerous, harmful and often deadly. Some of the most well-studied and widely known viruses, such as HIV and influenza, infect humans. However, viruses can also infect animals, plants and microorganisms, including fungi. Many fungi are medically, ecologically and economically significant, for example, causing diseases to humans, plants and insects or being used in industry to produce bread, cheese, beer and wine. Viruses that infect fungi are called mycoviruses (from the Greek work ‘myco’, meaning ‘fungus’). Mycoviruses do not cause harm to or kill the infected fungus; in contrast, they are ‘friendly’ viruses and we can utilize them to control the growth, pathogenicity and toxin production of fungi. This book describes a range of different mycoviruses and their geographical distribution, transmission and evolution, together with their effects on the fungal hosts and how these are brought about.