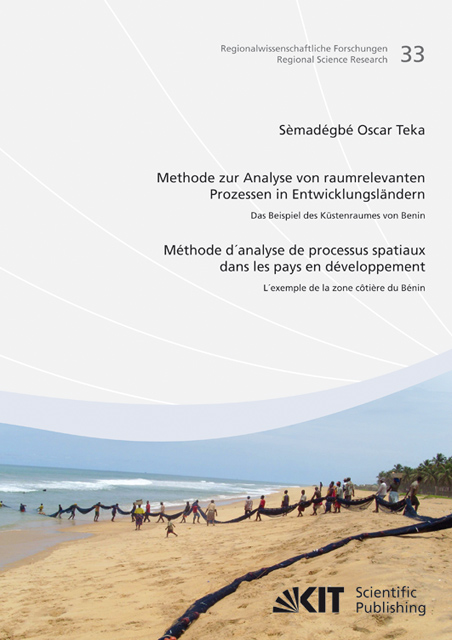 In developing countries there is a lack of space-oriented data. This complicates the implementation of different measures in existing social, economical and ecological systems and also restricts the estimation of future risks. Since systematic and periodical surveys in the sense of a census concept are mostly unrealistic, a method is needed to produce sufficiently adequate estimations of processes by random samples and indicators.This case study aims at developing a method on the basis of the combination of the representative samples and the indicator-based approaches for analyzing space relevant socioeconomic and ecological processes in Benin. In total we identified three main processes in the coastal area of Benin: the migration into coastal zone, the environment changes (land use, climate change and natural risks) and the vulnerability of local residents. Method consisted to two types of surveys: the interrogation of responsible persons in public office (32 semi-structured interviews) and of the population groups (667 structured interviews). These groups were distinguished according to ethnicity, gender, age as well as location of the dwelling place (rural or urban zone). In total, 262 women and 405 men belonging to the ethnic groups Fon, Yoruba, Houedah, Xla, Toffinou, Wéménou and Gun were interviewed. Members of each ethnic group were grouped according to sex (men and women), marital status and age (young adults, adults and elderly persons).For the data analysis, we used the log (x+1), the analysis variance using 4 factors, the Principal Component Analysis (PCA), the Factor Analysis (AFC) and Log-linear analysis. Multivariate analysis was applied to define the spatial variability of the vulnerability in the area of investigation. Results showed that: (1) the coastal area of Benin have the highest population density in the country, which can be attributed to migration and an increase in population, (2) there is a relationship between ethnicity and incidence of occupation as well as between religious affiliation and incidence of occupation, (3) the coastal area experiences numerous environmental problems and the effects of climate change, (4) all this has an impact on the socioeconomic components of the coastal area and increase the vulnerability of the coastal inhabitants, (5) this leads to the marginalization of actor groups and social problems, (6) the local population has certain patterns to explain natural and coastal risks and of vulnerability, (7) therefore, their reasoning of possible actions in response to issues which arise differs markedly from that of public administration, (8) taking into account this rationality is crucial in the participative coastal zone management.The method used is applicable for the analysis of regional processes when dealing with insufficient data. In addition it is transferable to other tropical coastal regions with a similar set of data problems. Therewith, the conducted methodology has successfully proven to be a suitable alternative under the specified conditions. In the end the new approach to detect spatially relevant processes with heterogeneous data sets, combing remote sensing, GIS and socioeconomic surveys for further research is identified to overcome the limitations of the achieved results that still exist.