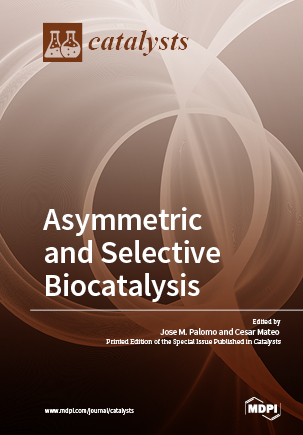 This Issue contains one communication, six articles, and two reviews. The communication from Paola Vitale et al. represents a work where whole cells were used as biocatalysts for the reduction of optically active chloroalkyl arylketones followed by a chemical cyclization to give the desired heterocycles. Among the various whole cells screened (baker’s yeast, Kluyveromyces marxianus CBS 6556, Saccharomyces cerevisiae CBS 7336, Lactobacillus reuteri DSM 20016), baker’s yeast provided the best yields and the highest enantiomeric ratios (95:5) in the bioreduction of the above ketones. In this respect, valuable chiral non-racemic functionalized oxygen-containing heterocycles (e.g., (S)-styrene oxide, (S)-2-phenyloxetane, (S)-2-phenyltetrahydrofuran), amenable to be further elaborated on, can be smoothly and successfully generated from their prochiral precursors. Studies about pure biocatalysts with mechanistical studies, application in different reactions, and new immobilization methods for improving their stability were reported in five different articles. The article by Su-Yan Wang et al. describes the cloning, expression, purification, and characterization of an N-acetylglucosamine 2-epimerase from Pedobacter heparinus (PhGn2E). For this, several N-acylated glucosamine derivatives were chemically synthesized and used to test the substrate specificity of the enzyme. The mechanism of the enzyme was studied by hydrogen/deuterium NMR. The study at the anomeric hydroxyl group and C-2 position of the substrate in the reaction mixture confirmed the epimerization reaction via ring-opening/enolate formation. Site-directed mutagenesis was also used to confirm the proposed mechanism of this interesting enzyme. The article by Forest H. Andrews et al. studies two enzymes, benzoylformate decarboxylase (BFDC) and pyruvate decarboxylase (PDC), which catalyze the non-oxidative decarboxylation of 2-keto acids with different specificity. BFDC from Pseudomonas putida exhibited very limited activity with pyruvate, whereas the PDCs from S. cerevisiae or from Zymomonas mobilis showed virtually no activity with benzoylformate (phenylglyoxylate). After studies using saturation mutagenesis, the BFDC T377L/A460Y variant was obtained, with 10,000-fold increase in pyruvate/benzoylformate. The change was attributed to an improvement in the Km value for pyruvate and a decrease in the kcat value for benzoylformate. The characterization of the new catalyst was performed, providing context for the observed changes in the specificity. The article by Xin Wang et al. compares two types of biocatalysts to produce D-lysine L-lysine in a cascade process catalyzed by two enzymes: racemase from microorganisms that racemize L-lysine to give D,L-lysine and decarboxylase that can be in cells, permeabilized cells, and the isolated enzyme. The comparison between the different forms demonstrated that the isolated enzyme showed the higher decarboxylase activity. Under optimal conditions, 750.7 mmol/L D-lysine was finally obtained from 1710 mmol/L L-lysine after 1 h of racemization reaction and 0.5 h of decarboxylation reaction. D-lysine yield could reach 48.8% with enantiomeric excess (ee) of 99%. In the article by Rivero and Palomo, lipase from Candida rugosa (CRL) was highly stabilized at alkaline pH in the presence of PEG, which permitted its immobilization for the first time by multipoint covalent attachment on different aldehyde-activated matrices. Different covalent immobilized preparation of the enzyme was successfully obtained. The thermal and solvent stability was highly increased by this treatment, and the novel catalysts showed high regioselectivity in the deprotection of per-O-acetylated nucleosides. The article by Robson Carlos Alnoch et al. describes the protocol and use of a new generation of tailor-made bifunctional supports activated with alkyl groups that allow the immobilization of proteins through the most hydrophobic region of the protein surface and aldehyde groups that allows the covalent immobilization of the previously adsorbed proteins. These supports were especially used in the case of lipase immobilization. The immobilization of a new metagenomic lipase (LipC12) yielded a biocatalyst 3.5-fold more active and 5000-fold more stable than the soluble enzyme. The PEGylated immobilized lipase showed high regioselectivity, producing high yields of the C-3 monodeacetylated product at pH 5.0 and 4 °C. Hybrid catalysts composed of an enzyme and metallic complex are also treated in this Special Issue. The article by Christian Herrero et al. describes the development of the Mn(TpCPP)-Xln10A artificial metalloenzyme, obtained by non-covalent insertion of Mn(III)-meso-tetrakis(p-carboxyphenyl)porphyrin [Mn(TpCPP), 1-Mn] into xylanase 10A from Streptomyces lividans (Xln10A). The complex was found able to catalyze the selective photo-induced oxidation of organic substrates in the presence of [RuII(bpy)3]2+ as a photosensitizer and [CoIII(NH3)5Cl]2+ as a sacrificial electron acceptor, using water as oxygen atom source. The two published reviews describe different subjects with interest in the fields of biocatalysis and mix metallic-biocatalysis, respectively. The review by Anika Scholtissek et al. describes the state-of-the-art regarding ene-reductases from the old yellow enzyme family (OYEs) to catalyze the asymmetric hydrogenation of activated alkenes to produce chiral products with industrial interest. The dependence of OYEs on pyridine nucleotide coenzyme can be avoided by using nicotinamide coenzyme mimetics. In the review, three main classes of OYEs are described and characterized. The review by Yajie Wang and Huimin Zhao highlights some of the recent examples in the past three years that combine transition metal catalysis with enzymatic catalysis. With recent advances in protein engineering, catalyst synthesis, artificial metalloenzymes, and supramolecular assembly, there is great potential to develop more sophisticated tandem chemoenzymatic processes for the synthesis of structurally complex chemicals. In conclusion, these nine publications give an overview of the possibilities of different catalysts, both traditional biocatalysts and hybrids with metals or organometallic complexes to be used in different processes—particularly in synthetic reactions—under very mild reaction conditions.