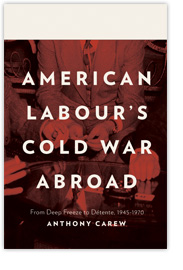 During the Cold War, American labour organizations were at the centre of the battle for the hearts and minds of working people. At a time when trade unions were a substantial force in both American and European politics, the fiercely anti-communist American Federation of Labor–Congress of Industrial Organizations (AFL–CIO) set a strong example for labour organizations overseas. The AFL–CIO cooperated closely with the US government on foreign policy and enjoyed an intimate, if sometimes strained, relationship with the CIA. The activities of its international staff, and especially the often secretive work of Jay Lovestone and Irving Brown—whose biographies read like characters plucked from a Le Carré novel—exerted a major influence on relationships in Europe and beyond. Having mastered the enormous volume of correspondence and other records generated by staffers Lovestone and Brown, Carew presents a lively and clear account of what has largely been an unknown dimension of the Cold War. In impressive detail, Carew maps the international programs of the AFL–CIO during the Cold War and its relations with labour organizations abroad, in addition to providing a summary of the labour situation of a dozen or more countries including Finland, France, Italy, Germany, Japan, Greece, and India. American Labour’s Cold War Abroad reveals how the Cold War compelled trade unionists to reflect on the role of unions in a free society. Yet there was to be no meeting of minds on this, and at the end of the 1960s the AFL–CIO broke with the mainstream of the international labour movement to pursue its own crusade against communism.