Advances in Chitin/Chitosan Characterization and Applications 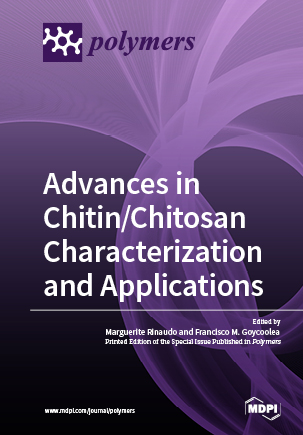 Functional advanced biopolymers have received far less attention than renewable biomass (cellulose, rubber, etc.) used for energy production. Among the most advanced biopolymers known is chitosan. The term chitosan refers to a family of polysaccharides obtained by partial de-N-acetylation from chitin, one of the most abundant renewable resources in the biosphere. Chitosan has been firmly established as having unique material properties as well as biological activities. Either in its native form or as a chemical derivative, chitosan is amenable to being processed&mdash;typically under mild conditions&mdash;into soft materials such as hydrogels, colloidal nanoparticles, or nanofibers. Given its multiple biological properties, including biodegradability, antimicrobial effects, gene transfectability, and metal adsorption&mdash;to name but a few&mdash;chitosan is regarded as a widely versatile building block in various sectors (e.g., agriculture, food, cosmetics, pharmacy) and for various applications (medical devices, metal adsorption, catalysis, etc.). This Special Issue presents an updated account addressing some of the major applications, including also chemical and enzymatic modifications of oligos and polymers. A better understanding of the properties that underpin the use of chitin and chitosan in different fields is key for boosting their more extensive industrial utilization, as well as to aid regulatory agencies in establishing specifications, guidelines, and standards for the different types of products and applications.