Made in China Yearbook 2017 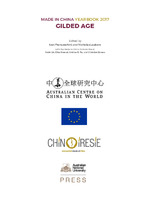 According to the Chinese zodiac, 2017 was the year of the ‘fire rooster’, an animal often associated with the mythical fenghuang, a magnificently beautiful bird whose appearance is believed to mark the beginning of a new era of peaceful flourishing. Considering the auspicious symbolism surrounding the fenghuang, it is fitting that on 18 October 2017, President Xi Jinping took to the stage of the Nineteenth Party Congress to proclaim the beginning of a ‘new era’ for Chinese socialism. However, in spite of such ecumenical proclamations, it became immediately evident that not all in China would be welcome to reap the rewards promised by the authorities. Migrant workers, for one, remain disposable. Lawyers, activists and even ordinary citizens who dare to express critical views also hardly find a place in Xi’s brave new world. This Yearbook traces the stark new ‘gilded age’ inaugurated by the Chinese Communist Party. It does so through a collection of more than 40 original essays on labour, civil society and human rights in China and beyond, penned by leading scholars and practitioners from around the world.