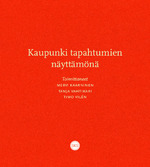 City as a Stage explores the diverse ways in which modern cities of the nineteenth and twentieth centuries presented and projected themselves, especially by staging major urban events, which have often been interpreted as major local and national turning points. In particular, the book discusses how cities were imagined through the prism provided by other cities, major events, as well as alternative pasts and futures. How –with admiration, indifference or contestation– did various urban actors engage with the city as a stage? The book paints a multifaceted picture of the history of urban events and town twinning, while at the same illustrating how students and travellers experienced cities such as Berlin, Rome, Helsinki, and Tampere. As for individual urban events, Stockholm’s General Art and Industrial Exposition of 1897, Helsinki’s 400th anniversary of 1950, and the Moscow Youth Festival of 1957 are all given their own chapter.