A Brief Anthropology of Time 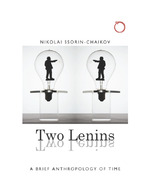 Highly innovative and theoretically incisive, Two Lenins is the first book-length anthropological examination of how social reality can be organized around different yet concurrent ideas of time. Nikolai Ssorin-Chaikov grounds his theoretical exploration in fascinating ethnographic and historical material on two Lenins: the first is the famed Soviet leader of the early twentieth century, and the second is a Siberian Evenki hunter—nicknamed “Lenin”—who experienced the collapse of the USSR during the 1990s. Through their intertwined stories, Ssorin-Chaikov unveils new dimensions of ethnographic reality by multiplying our notions of time. Ssorin-Chaikov examines Vladimir Lenin at the height of his reign in 1920s Soviet Russia, focusing especially on his relationship with American businessperson Armand Hammer. He casts this scene against the second Lenin—the hunter on the far end of the country, in Siberia, at the far end of the century, the 1990s, who is tasked with improvising postsocia