The Muslim Question in Europe 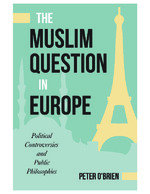 The book challenges the popular notion of a clash of cultures pitting Muslim and non-Muslim Europeans against one another. The study finds instead vehement conflict among three longstanding European public philosophies: liberalism, nationalism, and postmodernism. The consequential differences of outlook are demonstrated in four policy areas: 1) citizenship requirements, 2) the headscarf debate, 3) mosque-state relations and 4) counter-terrorism. The book reaches three important conclusions. First, Muslim Europeans do not represent a monolithic anti-Western bloc -- a Trojan Horse -- within Europe. They vehemently disagree among themselves but along the same basic liberal, nationalist, and postmodern contours as non-Muslim Europeans. Second, ideological discord significantly contributes to policy “messiness,” that is, to inconsistent, contradictory policies.