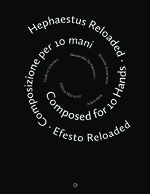 Hephaestus Reloaded / Efesto Reloaded, presented in a bilingual (English/Italian) publication, and whose five authors are from Greece, Italy, and the US, invokes as its first inspiration the myth of Hephaestus who embodied a twofold entity: both disabled and technically capacious. The myth of Hephaestus has been passed across the centuries as an ancient metaphor signifying the idea of becoming-world, in which any distinction between the natural and the artificial, or the organic and the technical, is blurred. Human beings, by virtue of their physical vulnerabilities and limits, have enhanced their technological powers to the point of transcending their own given nature. At present, a variety of critical discourses in disciplines such as philosophy, history, aesthetics, and cognitive sciences pay attention to our becoming-hybrid (organic and mechanical beings) – unleashing a space for research that probes the concept of transcendence. Each of the contributions in this book addresses – through its own peculiar perspective, method and experimental style – a new way to approach the role of transcendence in socio-cultural life.In the Occidental history of ideas, the notion of transcendence has received at least three canonical articulations that are challenged by this book: religious (Judeo-Christian traditions), philosophical (Platonic-intellectual universality of ideas), and scientific (the objective and technological turn of knowledge). Nonetheless, it is with the rise of cybernetics, with its digital and virtual modalities of systems, networks, and knowledge, that our human environment emerges as a source of knowledge in itself -- not simply as an object but rather as an immersive agency in which nature, knowledge, technique merge. The transcendence of the actual and the virtual into a “third” element is construed and analyzed in this book through conceptual schemes that rely on a post-binary or non-binary understanding of coincidences, triangulations, hybrids, or post-human combinatorics. What is ultimately explored is how transcendence is ejected from strictly theological, philosophical, or scientific groundings and emerges as a germinating point of becoming (something else).