And Another Thing: Nonanthropocentrism and Art 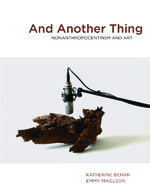 n And Another Thing: Nonanthropocentrism and Art, Katherine Behar and Emmy Mikelson explore how artists engage with nonanthropocentrism, one of the primary tenets shared by recent speculative realist and new materialist philosophies. Extending their investigations in And Another Thing, an exhibition which the authors curated in 2011, this volume documents both that exhibition and expands on two of its curatorial aims: prioritizing art historical contexts for contemporary philosophy (rather than the other way around), and apprehending artworks as historically specific objects of philosophy. The book is organized in three sections. In the first section, Behar and Mikelson provide long-form essays that chart the evolution of nonanthropocentrism and art, spanning eighteenth-century architectural drawing, performance, minimalist sculpture, and contemporary postminimalism. These essays raise the stakes for art and speculative realism, showing how artists have figured and prefigured nonanthropocentric ideas strikingly similar to those expounded in various “new” realist, materialist, and speculativist philosophies. Literally occupying the center of the volume, in section two, the exhibition is represented by full-color plates of eleven works by Carl Andre, Laura Carton, Valie Export, Regina José Galindo, Tom Kotik, Mary Lucking, Bruce Nauman, Grit Ruhland, Anthony Titus, Ruslan Trusewych, and Zimoun. Artworks by these emerging and canonical figures lay bare the networks of alliances underlying the exhibition. The book concludes with three short meditations on the relation between nonanthropocentrism and art, and what that relation might portend for future thought. These essays, by Bill Brown, Patricia Ticineto Clough, and Robert Jackson, are speculative in the sense that they perceive potentials for theory arising from nonanthropocentrism’s manifestations in art.