Chapter Exploring the intention to walk: a study on undergraduate students using item response theory and theory of planned behaviour 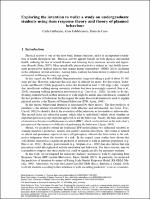 Physical activity is one of the most basic human functions, and it is an important foundation of health throughout life. Physical activity apports benefit on both physical and mental health, reducing the risk of several diseases and lowering stress reactions, anxiety and depression. More specifically, physical activity is defined as "any bodily movement produced by skeletal muscles that require energy expenditure" (World Health Organization), including in this definition several activities. Among them, walking has been shown to improve physical and mental well-being in every age group. Despite that, insufficient walking among university students has been increasingly reported, requiring walking promotion intervention. In order to do this, dividing students based on their intention to walk might be useful since the intention is considered as the best predictor of behaviour. In this work, we carried out a study on university students' intention to walk and some of its predictors by exploiting Item Response Theory (IRT) models. In particular, we inspected the predictors of intention by mean of Rating Scale Graded Response Model (RS-GRM). Then we used the Latent Class IRT model to divide students according to their intention to walk, including predictors' scores as covariates. We chose the intention's predictors according to an extension of the Theory of Planned Behaviour (TPB), with both classic and additional variables. The formers are attitude toward behaviour, subjective norms, and perceived behavioural control, whereas we used risk perception, self-efficacy, anticipation, self-identity and anticipated regret as additional variables. Data was collected administrating a self-report questionnaire to undergraduate students enrolled in the Psychology course at Federico II University of Naples.