Chapter Motivation of basketball players: a random-effects logit model for the probability of winning 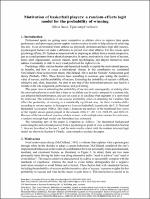 In the sport psychology, the theories of motivation, such as the McClelland's need achievement theory and the Nicholls' achievement goal theory, play an important role in the team sports in motivating and encouraging team members. The practical implementation of these theories relies on detecting the variables that significantly affect the probability of winning so as to identify the key elements for the team motivation, the role assignment, and the decision-making process. As the relevant variables change in accordance with the type of sport, in this contribution we focus on the basketball. In detail, we consider the traditional box score of the U.S. National Basket Association (NBA) regular season games played in the seasons 2016-17, 2017-18, 2018-19 and 2020-21. Each season comprises of 82 games played by each of the 30 teams, which cumulates to 4920 games. Hence, data have a multilevel structure, with multiple observations for each team. To properly address the data structure, the probability of winning is modelled through a random-intercept logit model, where teams are the upper-level units and games are the lower-level units. Among the independent variables, we take into account several possible determinants of winning, such as number of assists, number of offensive rebounds, number of defensive rebounds, number of turnovers, number of stolen balls, percentage of free throws made, number of fouls made. Moreover, we devote a special attention to the effect of two more independent variables: the number of key-players that are missing or injured and a dummy if the team plays without a day of rest between consecutive games. The study provides insights in the determinants of success of the basketball games: these results can be used by the team decision makers to assign roles that favor motivation and performance of players and of team as a whole.