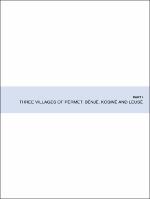 Part I of the book focusses on three villages in the Municipality of Përmet: Bënjë, Kosinë and Leusë. Bënjë, which lies entirely within the "Bredhi i Hotovës - Dangëlli" National Park, has undergone anthropization processes since prehistoric times. Due to its landscape and architectural value, it was recognised in 2016 as a “historical centre” and as such has come under the protection of the National Institute for the Cultural Heritage. There is little information concerning the history of Kosinë. The inhabitants show a strong connection with the Byzantine Church of the Dormition of Mary, but regrettably, it was impossible to go back to the origins of the current settlement. The village of Leusë, instead, existed before 1812, the year in which the Church of the Dormition of Mary was built. Today, the image of the village is a consequence of the partial reconstruction occured after the severe damage suffered during World War II. In the first chapters, the importance of the intangible heritage is stressed. Përmet’s food heritage is well-known on a national scale for its typical products (spirits, fruit preserves, dairy, meat, honey and bakery products), which result from the favourable climatic conditions and the rich biodiversity of the area. The tradition of the Tosk iso-polyphony, the hospitality of Përmet inhabitants and their historical devotion to religion, knowledge and study emerge with great strength together with the craftsmanship traditions and the exceptional skills of the itinerant and seasonal master builders. In the following chapters, the multiple aspects of the tangible heritage are analysed. The landscape in Përmet includes a vast variety of habitats, which have preserved to a large extent their original qualities. It is deeply marked by the Vjosa River and other several minor watercourses that crisscross the territory. A special attention is given to the historical built heritage of the villages, and specifically to three architectural assets (all listed as category I Cultural Monuments): the Katiu Bridge in Bënjë (an Ottoman bridge of the 18th century), the Church of the Dormition of Mary in Leusë (a Post-Byzantine building of the 19th century), and the Church of the Dormition of Mary in Kosinë (a Byzantine building of the end of the 12th century). For each of the aforementioned issues, the theoretical and historical analysis are closely bound to an evaluation of those features of the cultural heritage that could be enhanced to guarantee a sustainable tourism development of the area. Each chapter ends with a consistent set of specific intervention strategies. They are substantive tools for action aimed at public and private local actors.