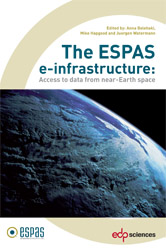 ESPAS provides an e-Infrastructure to support access to a wide range of archived observations and model derived data for the near-Earth space environment, extending from the Earth's middle atmosphere up to the outer radiation belts. To this end, ESPAS will serve as a central access hub for researchers who wish to exploit multi-instrument multipoint data for scientific discovery, model development and validation, and data assimilation, among others. Observation based and model enhanced scientific understanding of the physical state of the Earth's space environment and its evolution is critical to advancing space weather and space climate studies, two very active branches of current scientific research. ESPAS offers an interoperable data infrastructure that enables users to find, access, and exploit near-Earth space environment observations from ground-based and spaceborne instruments and data from relevant models, obtained from distributed repositories. In order to facilitate efficient user queries ESPAS allows a highly flexible workflow scheme to select and request the desired data sets. ESPAS has the strategic goal of making Europe a leading player in the efficient use and dissemination of near-Earth space environment information offered by institutions, laboratories and research teams in Europe and worldwide, that are active in collecting, processing and distributing scientific data. Therefore, ESPAS is committed to support and foster new data providers who wish to promote the easy use of their data and models by the research community via a central access framework. ESPAS is open to all potential users interested in near-Earth space environment data, including those who are active in basic scientific research, technical or operational development and commercial applications.