Thirteenth Century Wall Paintings in the Churches of Rhodes 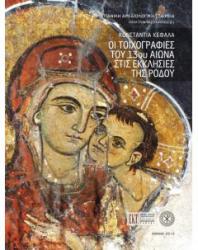 The study focuses on the monumental painting of the island of Rhodes, Greece, during the 13th century and specifically from the year 1204, when the Byzantine official Leo Gabalas took over the administration of the island, until the arrival of the Knights of Saint John in 1309. The remains of the artistic production are located in six churches in the town and the countryside of Rhodes. The monuments in question are presented in chronological order. After the detailed description and iconographic examination follows the stylistic analysis of the wall paintings along with the proposed dating. In particular, the study deals with the fres- coes of Hagios Phanourios in the Medieval Town of Rhodes, of the monastery of the Archangel Michael at Thari, of Hagios Ioannes Theologos at Kouphas in Paradeisi, of Hagios Niketas in Damatria, of Hagios Georgios Vardas in Apolakkia (1289/90) and of Hagi- os Georgios Kounaras in Asklepeio. Two sub-chap- ters concerning the wall paintings of the church of Hagios Georgios Vardas were expanded because of their special interest: one concerns the rare inscrip- tion Akedioktene which accompanies the representa- tion of the Virgin Glykophilousa and the other deals with the iconography and local cult of Saint Philemon, following his rare representation in the church. Given that the paintings of the church of Hagios Georgios Kounaras in Asklepeio is ascribed to the same hand as that of Hagios Georgios Vardas, the painter’s style in both monuments and the particularities of his art are examined in a special chapter. In the final part of the book, the overall consid- eration of the artistic production is developed: the structure and order of the iconographic pro- grammes are assessed, some interesting issues of iconography are discussed, as well as matters concerning the donors of the churches. The stylistic trends are analysed, compared with monuments from other Dodecanese islands and within the artistic currents of the first and second half of the 13th century.