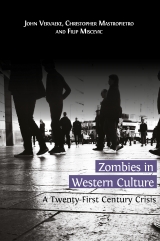 Why has the zombie become such a pervasive figure in twenty-first-century popular culture? John Vervaeke, Christopher Mastropietro and Filip Miscevic seek to answer this question by arguing that particular aspects of the zombie, common to a variety of media forms, reflect a crisis in modern Western culture. The authors examine the essential features of the zombie, including mindlessness, ugliness and homelessness, and argue that these reflect the outlook of the contemporary West and its attendant zeitgeists of anxiety, alienation, disconnection and disenfranchisement. They trace the relationship between zombies and the theme of secular apocalypse, demonstrating that the zombie draws its power from being a perversion of the Christian mythos of death and resurrection. Symbolic of a lost Christian worldview, the zombie represents a world that can no longer explain itself, nor provide us with instructions for how to live within it. The concept of 'domicide' or the destruction of home is developed to describe the modern crisis of meaning that the zombie both represents and reflects. This is illustrated using case studies including the relocation of the Anishinaabe of the Grassy Narrows First Nation, and the upheaval of population displacement in the Hellenistic period. Finally, the authors invoke and reformulate symbols of the four horseman of the apocalypse as rhetorical analogues to frame those aspects of contemporary collapse that elucidate the horror of the zombie. Zombies in Western Culture: A Twenty-First Century Crisis is required reading for anyone interested in the phenomenon of zombies in contemporary culture. It will also be of interest to an interdisciplinary audience including students and scholars of culture studies, semiotics, philosophy, religious studies, eschatology, anthropology, Jungian studies, and sociology.