Working People in Alberta: A History 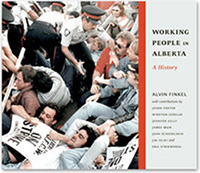 Working People in Alberta traces the history of labour in Alberta from the period of First Nations occupation to the present. Drawing on over two hundred interviews with labour leaders, activists, and ordinary working people, as well as on archival records, the volume gives voice to the people who have toiled in Alberta over the centuries. In so doing, it seeks to counter the view of Alberta as a one-class, one-party, one-ideology province, in which distinctions between those who work and those who own are irrelevant. Workers from across the generations tell another tale, of an ongoing collective struggle to improve their economic and social circumstances in the face of a dominant, exploitative elite. Their stories are set within a sequential analysis of provincial politics and economics, supplemented by chapters on women and the labour movement and on minority workers of colour and their quest for social justice. Published on the occasion of the 100th anniversary of the Alberta Federation of Labour, Working People in Alberta contrasts the stories of workers who were union members and those who were not. In its depictions of union organizing drives, strikes, and working-class life in cities and towns, this lavishly illustrated volume creates a composite portrait of the men and women who have worked to build and sustain the province of Alberta.