With and Without Galton: Vasilii Florinskii and the Fate of Eugenics in Russia 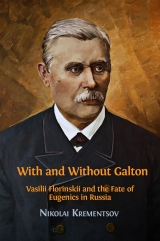 In 1865, British polymath Francis Galton published his initial thoughts about the scientific field that would become ‘eugenics.’ The same year, Russian physician Vasilii Florinskii addressed similar issues in a sizeable treatise, entitled Human Perfection and Degeneration. Initially unheralded, Florinskii’s book would go on to have a remarkable afterlife in twentieth- and twenty-first-century Russia. In this lucid and insightful work, Nikolai Krementsov argues that the concept of eugenics brings together ideas, values, practices, and fears energised by a focus on the future. It has proven so seductive to different groups over time because it provides a way to grapple with fundamental existential questions of human nature and destiny. With and Without Galton develops this argument by tracing the life-story of Florinskii’s monograph from its uncelebrated arrival amid the Russian empire’s Great Reforms, to its reissue after the Bolshevik Revolution, its decline under Stalinism, and its subsequent resurgence: first, as a founding document of medical genetics, and most recently, as a manifesto for nationalists and racial purists. Krementsov’s meticulously researched ‘biography of a book’ sheds light not only on the peculiar fate of eugenics in Russia, but also on its convoluted transnational history, elucidating the field’s protean nature and its continuing and contested appeal to diverse audiences, multiple local trajectories, and global trends. It is required reading for historians of eugenics, science, medicine, education, literature, and Russia, and it will also appeal to the general reader looking for a deeper understanding of this challenging subject.