The Wages of Relief: Cities and the Unemployed in Prairie Canada, 1929 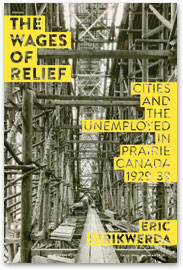 In the early part of the Dirty Thirties, the Canadian prairie city was a relatively safe haven. Having faced recession before the Great War and then again in the early 1920s, municipalities already had relief apparatuses in place to deal with poverty and unemployment. Until 1933, responsibilty for the care of the urban poor remained with local governments, but when the farms failed that year, and the Depression deepened, western Canadian cities suffered tremendously. Recognizing the severity of the crisis, the national government intervened. Evolving federal programs and policies took over responsibility for the delivery of relief to the single unemployed, while the government simultaneously withdrew financing for all public works projects. Setting municipal relief administrations of the 1930s within a wider literature on welfare and urban poor relief, Strikwerda highlights the legacy on which relief policymakers relied in determining policy directions, as well as the experiences of the individuals and families who depended on relief for their survival. Focusing on three prairie cities—Edmonton, Saskatoon, and Winnipeg—Strikwerda argues that municipal officials used their power to set policy to address what they perceived to be the most serious threats to the social order stemming from the economic crisis. By analyzing the differing ways in which local relief programs treated married and single men, he also explores important gendered dynamics at work in the response of city administrators to the social and economic upheaval of the Depression. Probing the mindset of local elites struggling in extraordinary circumstances, The Wages of Relief describes the enduring impact of the policy changes made in the 1930s in the direction of a broad, national approach to unemployment—an approach that ushered in Canada’s modern welfare system.