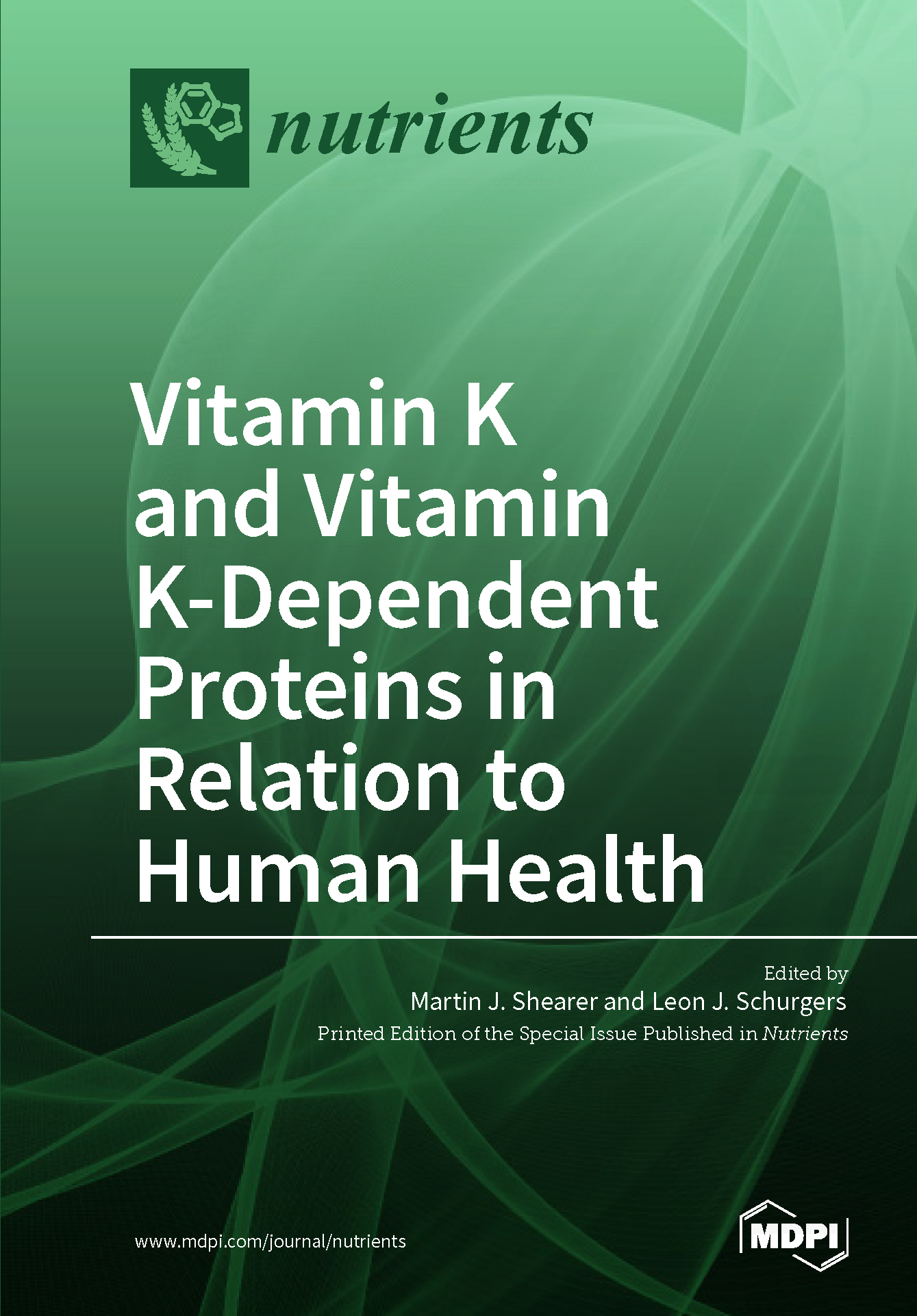 Vitamin K comprises a group of highly lipophilic molecules that possess a common 2-methyl-1, 4-naphthoquinone nucleus and a variable polyisoprenoid side chain at the 3-position that can vary in both length and degree of saturation. In nature, these forms are found as a single plant form (phylloquinone or vitamin K1) and a series of bacterial forms (menaquinones or vitamin K2). Vitamin K acts as a cofactor for a microsomal enzyme, γ-carboxyglutamyl carboxylase (GGCX), that serves to transform specific peptide-bound glutamate residues found in certain specialized proteins to γ-carboxyglutamate (Gla). This posttranslational protein modification is the only firmly established biochemical function of vitamin K. The resultant vitamin K-dependent (VKD) proteins, or Gla proteins, are diverse in both structure and function and are found in many cell and tissue types. The best-known example of the health role of vitamin K-mediated protein γ-carboxylation is in the synthesis of several VKD blood coagulation proteins, which are essential for the maintenance of extracellular haemostasis. An overt deficiency of vitamin K results in bleeding and although rare in most populations, vitamin K deficiency bleeding (VKDB) in early infancy has potentially devastating and fatal consequences because bleeding commonly occurs within the brain. For this reason it is recommended that all newborn infants should receive vitamin K prophylaxis. On the other hand, the deliberate lowering of circulating VKD-coagulation factors by the therapeutic administration of vitamin K antagonists (VKA) such as warfarin is used to treat and prevent thrombotic disorders. The functions of most non-coagulation Gla proteins remain uncertain, but are suspected to play roles in processes as diverse as bone and cardiovascular mineralization, vascular integrity, energy metabolism, immune response, brain metabolism, and in cellular growth, survival, and signalling. For the most part, extrapolations of the cellular properties of extrahepatic Gla proteins to tangible health benefits are unclear or fuzzy, as are the health consequences of their undercarboxylation. However, there is evidence that higher nutritional intakes of vitamin K are required to enable maximal γ-carboxylation of certain extrahepatic Gla proteins, such as osteocalcin and matrix Gla protein (MGP). Osteocalcin and MGP currently represent the best-studied extrahepatic Gla proteins with respect to their putative roles in bone and cardiovascular health, respectively. In addition, osteocalcin may play a role in regulating energy metabolism. Much current interest focuses on the role of MGP as an inhibitor of vascular mineralization, particularly in renal disease and in patients taking VKA. Interestingly, although VKA have been in clinical use for decades, recent evidence suggests that they may cause unintended health consequences by disrupting the function of MGP resulting in calcification and loss of the functional integrity of the vessel wall. Apart from the role of vitamin K in γ-carboxylation there is evidence that some forms, particularly menaquinone-4 (MK-4), have a direct influence on cellular functions. This Special Issue of Nutrients focuses on advances that extend our knowledge of the biochemical functions and health roles played by both the micronutrient vitamin K and its target Gla proteins. The scope of potential topics is wide and may include studies in population and patient groups, animal models and at the cellular level. Examples include the presentation, diagnosis, incidence, causes, and prevention of deficiency syndromes, of which the most obvious is bleeding in infancy, but also extends to other putative roles of vitamin K such as in bone and cardiovascular health. In trying to define extrahepatic functions of vitamin K it is important to obtain evidence of pathophysiological signatures that may derive from chronic suboptimal vitamin K intakes or as a consequence of vitamin K antagonists. An important related question is whether the pathophysiology can be ameliorated or prevented by judicious vitamin K supplementation. Equally important to our understanding of the human physiology of vitamin K are studies that define the relative functional importance of individual vitamers and how differences in their availability and metabolism affect their biological activity. Recent highlights in metabolism include the delineation of the importance of vitamin K epoxide reductase (VKOR) in maintaining vitamin K status and the intriguing hypothesis that its paralog VKOR-like 1 enzyme (VKORL1) may serve an antioxidant function. Another highlight illustrating the importance of metabolism to vitamin K function is the discovery that the enzyme UbiA prenyltransferase-containing domain 1 (UBIAD1) participates in the cellular conversion of phylloquinone to MK-4 with menadione as a metabolic intermediate. We invite authors to submit reviews or original research on any of the above topics.