Systematics and Phylogeny of Weevils 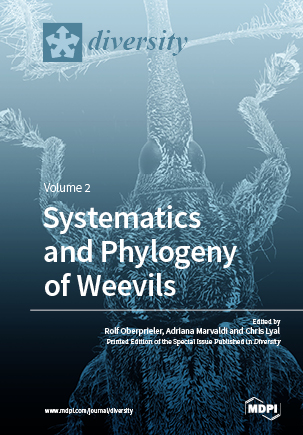 This Special Issue on the Systematics and Phylogeny of Weevils presents 31 new research papers on one of the most diverse and successful groups of animals on Earth, the beetle superfamily Curculionoidea. It was in part inspired to commemorate the extraordinary life and scientific achievements of Guillermo (&ldquo;Willy&rdquo;) Kuschel (1918&ndash;2017), who shaped this field of science over the last century like no other weevil systematist. The papers in this memorial issue span weevil faunas from all over the globe, including South and Central America, Africa, Europe and the Near East, South-East Asia, New Guinea, Australia and New Zealand. They include major advances on the phylogeny and classification of the &ldquo;broad-nosed&rdquo; weevils (Entiminae), on the weevils associated with American cycads and on the unique extinct weevil fauna preserved in the 100-million-year-old Burmese amber, when weevils started to diversify alongside the oldest angiosperm plants. They comprise a tribute to Willy Kuschel, the proceedings of a weevil symposium held in his honor in 2016 in Orlando, Florida, 24 systematic studies (including seven phylogenetic analyses) and five other contributions on the diversity, biology, distribution, evolution and fossil history of weevils. In the papers collated in this volume, 30 new genera and 92 new species of weevils are described and a new family of extinct weevils is recognized.