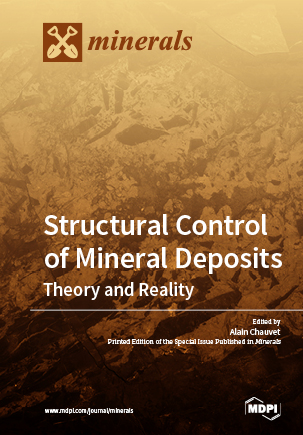 ""Structural Control"" remains a crucial point that frequently lacks in any scientific and/or economic analysis of ore deposits, whatever their type and class. The case of lode deposits is exemplary, although also other deposits, like breccia pipe, stockwerk, massive sulphides, skarn, etc., can, surprisingly, be concerned. Several concepts like the gold-bearing shear zone have not proven valid during the last few decades in terms of our understanding of gold deposit and have been totally abandoned. Additionally, the relationships between magmatism, regional tectonic context, and mineralization remain uncertain and have been debated in several recent publications. This demonstrates that this issue is still relevant, and its solution may help in the distinction between intrusion-related and orogenic deposits. In this Special Issue, we particularly invite any case study of mineral deposits, in which it has been demonstrated that structural geology may have a significant role in the establishment of the deposit model of formation and/or on exploration and exploitation programs. Examples in which the structural model diverges from those described in the classical literature are particularly welcomed, including studies in which relationships with magmatism can be suspected and/or demonstrated. Indeed, all cases that illustrate concepts that differ from the classic ones and from theoretical models may represent significant contributions to this volume.