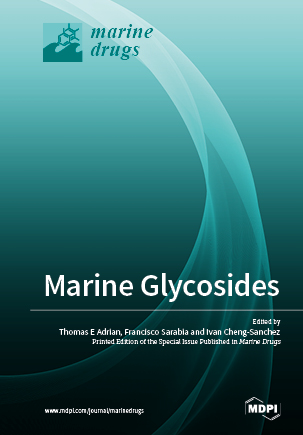 In recent years, there has been a steady increase in the publication of papers on the chemistry, biology, and potential clinical uses of marine glycosides. Indeed, more than half of the papers published in this field are less than a decade old. Glycosides have been isolated from species as diverse as algae, fungi, anthozoans, and echinoderms. Even fish of the genus Pardachirus produce glycosides, which they use as shark repellents.&lt;false,&gt;The major interest in these compounds as potential drugs stems from their broad spectrum of biological effects. They have been shown to have antimicrobial, antifungal, anti-inflammatory, immune modulatory, and anticancer effects. The anticancer effects of marine glycosides include cell cycle suppression, the induction of apoptosis, and the inhibition of migration, invasion, and metastasis, as well as antiangiogenesis. Marine glycosides influence membrane permeability and have been shown to influence membrane transport at the molecular level through effects on transport carriers and pumps, as well as effects on ligand-gated and voltage-gated channels. Various marine glycosides have been shown to activate sphingomyelinase and ceramide synthesis, to inhibit topoisomerase activity, receptor tyrosine kinase activity, and multidrug resistance protein activity, and to antagonize eicosanoid receptors.&lt;false,&gt;This Special Issue covers the entire scope of marine organism-derived glycosides that are of potential value as pharmaceutical agents or leads. These include, but are not limited to, tetracyclic triterpene glycosides, other triterpene glycosides, steroid glycosides, and glycosides of non-isoprenoid aglycones.