Land Squandering and Social Crisis in the Spanish City 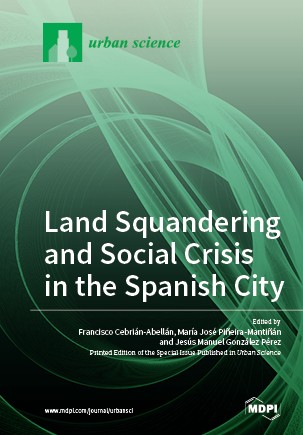 The last two decades have been marked by intense and accelerated economic, political, and cultural processes that have affected urban spaces. These changes have occurred in different parts of cities (traditional centers, edges, peripheries) and at different levels of the urban system (large and medium-sized cities and in their respective areas of influence). Possibly the clearest expression of the spatial effects on cities can be perceived in their morphological transformations, their territorial dimensions, or in their social problems. Until 2008, urban–territorial processes were a reflection of the logic and inconsistencies of an expansive economic context and of a structural context that favored the development of cities through concurrent processes and actors. As a result, the built land and amount of urbanized and built surfaces increased, together with processes of the expansion and modernization of cities. Since 2008, the expansive economic cycle has ended, and there have been diverse negative consequences. Notably, the construction sector has come to an abrupt halt. Access to credit has also been reduced, and unemployment has increased. The economic recession has caused sociodemographic and socioeconomic issues exemplified by housing vulnerability, with dispossession, evictions, a shortage of social housing, and energy poverty.