The Interplay of Microbiome and Immune Response in Health and Diseases 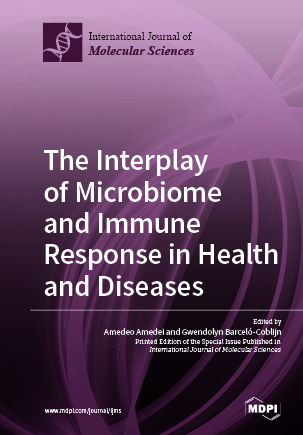 [Increasing evidence suggests that microbiota and especially the gut microbiota (the microbes inhabiting the gut including bacteria, archaea, viruses, and fungi) plays a key role in human physiology and pathology. Recent findings indicate how dysbiosis—an imbalance in the composition and organization of microbial populations—could severely impact the development of different medical conditions (from metabolic to mood disorders), providing new insights into the comprehension of diverse diseases, such as IBD, obesity, asthma, autism, stroke, diabetes, and cancer. Given that microbial cells in the gut outnumber host cells, microbiota influences human physiology both functionally and structurally. Microbial metabolites bridge various—even distant—areas of the organism by way of the immune and hormone system. For instance, it is now clear that the mutual interaction between the gastrointestinal tract and the brain (gut–brain axis), often involves gut microbiota, indicating that the crosstalk between the organism and its microbial residents represents a fundamental aspect of both the establishment and maintenance of healthy conditions. Moreover, it is crucial to recognize that beyond the intestinal tract, microbiota populates other host organs and tissues (e.g., skin and oral mucosa). We have edited this eBook with the aim of publishing manuscripts focusing on the impact of microbiota in the development of different diseases and their associated treatments.]