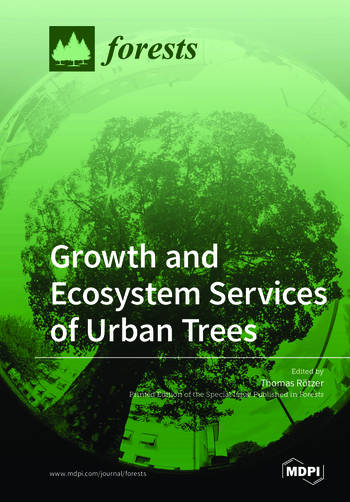 Numerous studies indicate an accelerated growth of forest trees, induced by ongoing climate change. Similar trends were recently found for urban trees in major cities worldwide. Studies frequently report about substantial effects of climate change and the urban heat island effect (UHI) on plant growth. The combined effects of increasing temperatures, changing precipitation patterns, and extended growing season lengths, in addition to increasing nitrogen deposition and higher CO2 concentrations, can increase but also reduce plant growth. Closely related to this, the multiple functions and services provided by urban trees may be modified. Urban trees generate numerous ecosystem services, including carbon storage, mitigation of the heat island effect, reduction of rainwater runoff, pollutant filtering, recreation effects, shading, and cooling. The quantity of the ecosystem services is often closely associated with the species, structure, age, and size of the tree as well as with a tree’s vitality. Therefore, greening cities, and particularly planting trees, seems to be an effective option to mitigate climate change and the UHI. The focus of this Special Issue is to underline the importance of trees as part of the urban green areas for major cities in all climate zones. Empirical as well as modeling studies of urban tree growth and their services and disservices in cities worldwide are included. Articles about the dynamics, structures, and functions of urban trees as well as the influence of climate and climate change on urban tree growth, urban species composition, carbon storage, and biodiversity are also discussed.