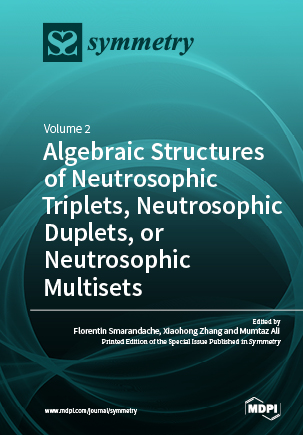 Neutrosophy (1995) is a new branch of philosophy that studies triads of the form (<A>, <neutA>, <antiA>), where <A> is an entity {i.e. element, concept, idea, theory, logical proposition, etc.}, <antiA> is the opposite of <A>, while <neutA> is the neutral (or indeterminate) between them, i.e., neither <A> nor <antiA>.Based on neutrosophy, the neutrosophic triplets were founded, which have a similar form (x, neut(x), anti(x)), that satisfy several axioms, for each element x in a given set.This collective book presents original research papers by many neutrosophic researchers from around the world, that report on the state-of-the-art and recent advancements of neutrosophic triplets, neutrosophic duplets, neutrosophic multisets and their algebraic structures – that have been defined recently in 2016 but have gained interest from world researchers. Connections between classical algebraic structures and neutrosophic triplet / duplet / multiset structures are also studied. And numerous neutrosophic applications in various fields, such as: multi-criteria decision making, image segmentation, medical diagnosis, fault diagnosis, clustering data, neutrosophic probability, human resource management, strategic planning, forecasting model, multi-granulation, supplier selection problems, typhoon disaster evaluation, skin lesson detection, mining algorithm for big data analysis, etc.