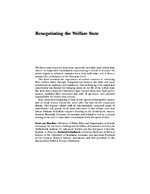 Why have some countries have been more successful in welfare state reform than others? This book examines the experiences of various countries in reforming their welfare states through renegotiations between the state and peak associations of employers and employees. This corporatist concertation has been blamed for bringing about all the ills of the welfare state, but lately corporate institutions have learned from their bad performances, modified their structures and style of operation, and assumed responsibility for welfare state reform. Consensual bargaining is back on the agenda of both policy makers and of social science. This topical volume with its internationally respected panel of contributors will appeal to all those interested in the welfare state and labour relations. It includes chapters focusing on the Netherlands, Austria, Sweden, Denmark, Germany, Switzerland and Ireland as well as a section looking at the role of corporatist concertation in the European Union.