History According to Cattle 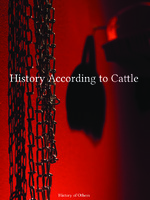 History According to Cattle is an expanded account of the acclaimed art and research project History of Other’s first major installment, The Museum of the History of Cattle (2013). The exhibition presents a large-scale ethnographic museum of world history as seen from the perspective of cattle, one of the most important companion species of humans. Thus, The Museum of the History of Cattle is the first museum to exhibit the cultural history of a non-human species. In the exhibit, the connections of animal rights issues with violations of human rights become visible while the situations of indigenous cattle populations, the development of genetics, and industrialization are imagined through the eyes of this silent, ever present companion. Both tragic and humorous, The Museum of the History of Cattle portrays humans as a species mesmerized by its own image. The book-catalog includes a full presentation of the research and visual material of the exhibition, with contextualizing essays by art historian Anne Aurasmaa, philosopher Elisa Aaltola, theorist Kirs Forkasiewizc, and researcher-curator Radhika Subramaniam. Drawing from critical animal studies, animal philosophy, art theory and the lived companionship of humans and cattle, the publication provides a fresh insight into the possibilities of creative imagination, and into the ethical encountering of the species-other in our society.