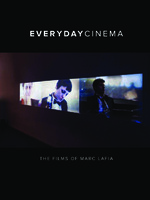 Everyday Cinema presents the films (eight features and numerous shorts, computational, and installation films) of Marc Lafia. In his many films (including Exploding Oedipus; Love and Art; Confessions of an Image; Revolution of Everyday Life; Paradise; Hi, How Are You Guest 10497; and 27) Lafia probes what it is to construct an image, to forge systems of representation, to see and represent ourselves. His work has been defined as a cinema of emergence, a cinema of the event, in which the very act of ubiquitous recording creates something new. Everyday Cinema is comprised of two parts, the first an in-depth look at his films and installations, project by project, providing background on how they came about, Lafia’s process and ideas. The second part features selected interviews and over two hundred film stills wherein Lafia puts forward a new sense of the possibility of the cinema. As we all relentlessly record ourselves and are recorded, we become part of the cinematic fabric of life, part of a spectacle of which we are both constituent and constitutive. This is what Lafia sets out to capture and examine.