Athens and the War on Public Space: Tracing a City in Crisis 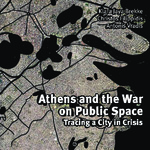 Sometimes, the maelstrom of a crisis can be captured in a single image. The image of the mundane, barely noticeable movement of an urban dweller as they go about their everyday life. Athens and the War on Public Space commences from images just like this one, collected over a two-year period of research (2012–2014) in Athens during a time of severe financial and political crisis. For the author-curators of this volume, public space became a light-sensitive surface upon which they could begin to map the material imprints of the most structural and violent characteristics of the crisis, and their research spread in different directions, tracking the role of infrastructure and the shifts the financial crisis brought about upon built environments, the violent manifestations of the official anti-migrant policy, the rise of racism, the imposition of the emergency upon public space, and the phenomenology of mass transit.