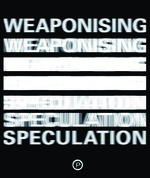 This book contains the proceedings from Weaponising Speculation, a two-day conference and exhibition that took place in Dublin in March 2013. Weaponising Speculation was organised by D.U.S.T. (Dublin Unit for Speculative Thought) and aimed to be an exploration of the various expressions of DIY theory operative in the elsewheres, the shafts and tunnels of the para-academy. The topics covered all come under the welcoming embrace of speculation, spanning a broad range: from art, philosophy, nature, fiction, and computation to spiders, culinary cosmology, and Oscar the Grouch. The book itself aims to be more than just a collection of essays and catalogue of artworks, but also a documentation of the event as a whole. An object that both those present at the event and those who missed it would want to own — bringing something new to both sets of readers