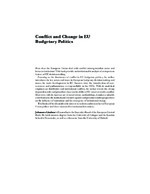 Why did the European Union experience a stark variation in the levels of conflict between the late 1970s, when budgetary disputes dominated European politics, and the 1990s, when political actors were able to settle upon budgetary agreements without major conflicts? This book responds to this key question with a two-step argument: Its first part shows that decision-making rules can be regarded as a key determinant of the level of conflict in EU budgetary politics. It details far-reaching reform in 1988 reduced conflict, because it introduced an institutional setting for multiannual budget planning that corrected the deficiencies of the original budget treaty. Having identified institutional change as the trigger for the reduction of conflict, the second part of this study focuses on the 1988 reform. It shows how a number of ‘reproduction mechanisms’ prevented major institutional change in the 1970s and early 1980s. When these ‘reproduction mechanisms’ lost force, a reform became possible and a new institutional setting emerged in 1988. These findings deliver a sharp insight into the interplay between rules and conflict in the still evolving political system of the EU. Moreover, by identifying precise conditions for the occurrence of institutional change, and by linking political performance of institutions to their stability this is a significant contribution to institutionalist research in social science. This book is an excellent resource for students and scholars of the European Union, Political Science, International Relations, Public Policy and Public Finance.