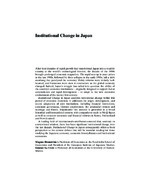 This is a new analysis of recent changes in important Japanese institutions. It addresses the origin, development, and recent adaptation of core institutions, including financial institutions, corporate governance, lifetime employment, and the amakudari system. After four decades of rapid economic growth in Japan, the 1990s saw the country enter a prolonged period of economic stagnation. Policy reforms were initially half-hearted, and businesses were slow to restructure as the global economy changed. The lagging economy has been impervious to aggressive fiscal stimulus measures and has been plagued by ongoing price deflation for years. Japan’s struggle has called into question the ability of the country’s economic institutions, originally designed to support factor accumulation and rapid development, to adapt to the new economic environment of the twenty-first century. This book discusses both historical and international comparisons including Meiji Japan, and recent economic and financial reforms in Korea, Scandinavia, Switzerland, and New Zealand, placing the current institutional changes in perspective. The contributors argue that, contrary to conventional wisdom that Japanese institutions have remained relatively rigid, there has been significant institutional change over the last decade.